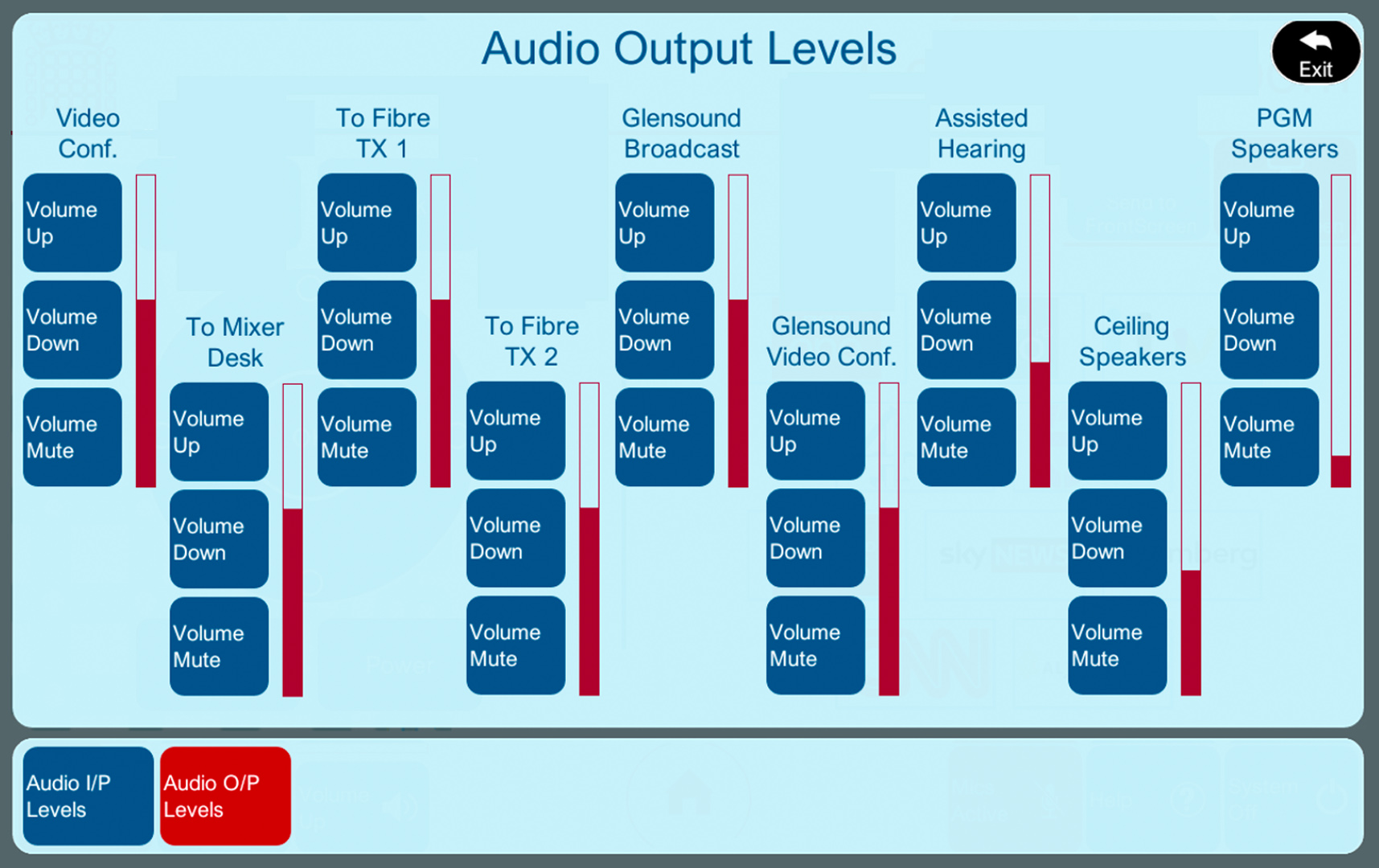 Accompanying image shows an example section of the control GUI.

Letchworth, Hertfordshire, UK –  ATG Danmon has completed a committee room video conferencing and audiovisual control system for one of Europe's longest established national legislatures. The facility is currently assigned to function as a venue in which elected representatives and their advisors can hold private discussion meetings. It is also used for seminars and as general meeting room space.

A core requirement was the need to make the system easy to operate. ATG was commissioned to design a complete solution including removal of legacy equipment which was no longer being used. Related IT infrastructure also needed replacement with a solution that would increase reliability.

The upgraded system retains the operational simplicity of the original, allowing all parameters to be adjusted via an intuitive touchscreen GUI which displays the relevant controls needed for each task. This can be used to perform operations such as media source selection, laptop connection and display selection. Broadcast television channels can be accessed directly or via the EPG. Frequently accessed channels such as major national and international news sources can be reached by touching their allocated icon.

The audio input page allows easy adjustment of delegate microphone and radio-microphone voice reinforcement levels, including a bargraph-style loudness meter for each feed. The audio output level page provides graphically similar tools for an audio feed to a mixing desk, fibre transmission links, sound reinforcement and a video conference channel. On/off control facilities for a Bosch microphone system were requested. These are deployed in 'all-mic-open' mode to provide hearing assistance via an inductive electromagnetic loop and infra-red optical transmitters.

Additional elements of the project included tests to confirm the functionality of all other features, such as volume control settings, plus the update of documentation and schematics to reflect the changes. Training sessions were provided for relevant staff within the legislature.

"This is the most recent of several projects we have worked on in the legislative sector over the past two years," says ATG Danmon Managing Director Russell Peirson-Hagger. "Others have included multi-camera mobile video production systems which allow live broadcasting of committee activity. More recently we were commissioned to upgrade the interface portals for use by TV and radio crews when interviewing politicians and political commentators. As with all other projects we have been working on since early Q1, the committee room video conferencing and AV control system upgrade was performed in fully compliance with the health and safety regulations set in place against Covid-19."